In this section we present the program of the XIX Solo Contest, which will be held at the Theater of the Maspalomas Cultural Center on Thursday, October 15 at 8:00 p.m.* 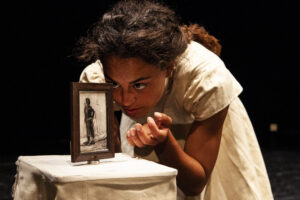 “Love liberates, it doesn’t just incarcerate. That’s ego. “I love you. I would like to be near you, but that’s not possible now… So, Go.”  The Home of Camila is the story of a soft letting go of responsibilities, life & love. It explores the journey of one lady and her mutation. She gentle relieves herself, her defining thoughts and memories flow from her mind, crashing and landscaping a new environment, like that of a waterfall. And the water can caress people but it destroys too. There is nothing water cannot break. Bound to an undefinable space and time, stuck in front of this presence, which stands alone next to her, she starts her mutation and an earthquake of thoughts and emotion overwhelms her. Something is going to happen. In her chaotic stillness she witnesses the outside, then a burning desire to engulf the beyond overcomes her. Cascading emotions freely control her breath, her chest, her legs and the watery embrace of her releasing thoughts drag her into an unknown travel. A lifetime of pain swallowing her up and finally… Passively, she drowns in the beautiful silence and the peace of her acceptance, which once shared space with the loud earth. Nothing is or will be as it was before. What’s the feeling of nothingness, of loneliness, of silence in this loud earth?  Who are our life companions? Are they real, are they dreams?”.

“Evoke the sublime song towards transcendence. The subtle vibration of the muscle as a passage between states. The ritual that evolves to the esoteric that transforms to the sacred. Inhabiting territories of the personal imaginary, delivered landscapes offered to be viewed through a dancing body. The observer, as a witness of the corporeal reverberation, of the inexplicable; as a traveler through the geography of the symbolic subconscious to arrive at the place that is, at the place she/he wishes it to be…”

“Our childhood shapes us as the human beings that we are today. Connecting with other people’s traumas inevitably affect us. Sharing the weight of their pain can lead us to blame them and us as well. We create barriers to protect ourselves to filter the outside world pain. During this process, an internal fight is generated. A new beginning can be achieved when we stop blaming and instead we start caring. Embracing the trauma and facing it from a different perspective will make it disappear or simply change form, leading us to a new life.”

“Jill Crovisier’s BOLERO is a rhythmic and personal journey of a man who finds slowly his inner voice in his own territory. Compared to the circle of life the roller skates become symbol for the fast progress in our world, the uncertainty and instability it brings with it but also for control and persistence. The dancer will take you on a powerful ride on Ravel’s masterpiece”.

“What will remain of the body movement of a dancer, if not the apparent inactivity that a chrysalis allows us to see? CRISALIDE is the Italian term to define the phase prior to the transformation of the larva into a butterfly. The artist opens his wings showing his result at the end and boasts of his finished work”.

* The programme could be subject to change depending on the considerations of the health authorities in relation to COVID 19.