“Rising, scratching myself off the floor, moving forward. Disassembling and reassembling buildings that have become temporary, with the aim of continuing to move and search for the ultimate structure that I define as home”.

“Audition as a condition. As a physical and psychological state. As an evolutionary process. As brutality. As a relationship of authority. As a statement. As an obstacle. As a prerequisite. As a ‘journey’. As a journey. As a verdict. As a depreciation of personality. As a retrospect. As a role-playing game. As a rejection. As an exploration of boundaries. As a total availability”.

A solo that explores the waiting and the relationship of the body with past and present time. The inspiration comes from A Costa da Morte, Galicia, the coast with the most shipwrecks in Europe. A tribute to the women, those who always wait for the ocean to return, at least, the bones of their relatives. Meanwhile, the salt corrodes the hands that weave, net by net, what keeps them in port».

“The soft shell is wrapped in the naked body. It is free, twisted, always alert and maintain the attack state, but it is destroyed instantly. Finally, it hides in the empty shell”.

Ticket Box: To book your tickets call 902 31 73 27 or set a date at the ticket box: https://auditoriodetenerife.com/es/contactar

“ ‘C o n v e r g e n c i a s’  is a landscape piece that unrolls between time and space almost pictorially. Two female bodies cross the stage in a radical way, carving it into a single diagonal. Each body unfolds in the other the dance of a single common body that develops through a wave of memories, desires and torsos that explore spirals. ‘C o n v e r g e n c i a s’.   Two parallel journeys. A common cycle. A pattern that repeats itself. Perhaps a mantra. A ceremony. A biomechanical exploration of the movement of the spine. A request for immersion. An attempt at an exit. A possibility of returning to oneself. An effort to move forward. To die and to be reborn, in the continuous present. The coexistence of the common and the diverse. Together. Trying the way of one, testing the way of the other, experimenting the way of one with the other, inventing the shared. Inhabiting convergence in touch, in sight, in breath… in that which unites and accompanies us on this solitary path, but in the union of two”.

“This creation wants to investigate the emotional aspects of winter taking inspiration from the artwork ‘Return from the woods’ by Giovanni Segantini. The difficulties of life often create a long winter of the soul. And only when a thick fog flares up within us is that, through it, we can immerse ourselves completely in ours essence and rediscover ourselves, flourish again, let go of the cold to find a new light. In a snowy blanket and desolate, a flame turns on out of nowhere. Also winter has its colors. All enclosed in a pure white”.

Order without liberty? Or Liberty without order? … 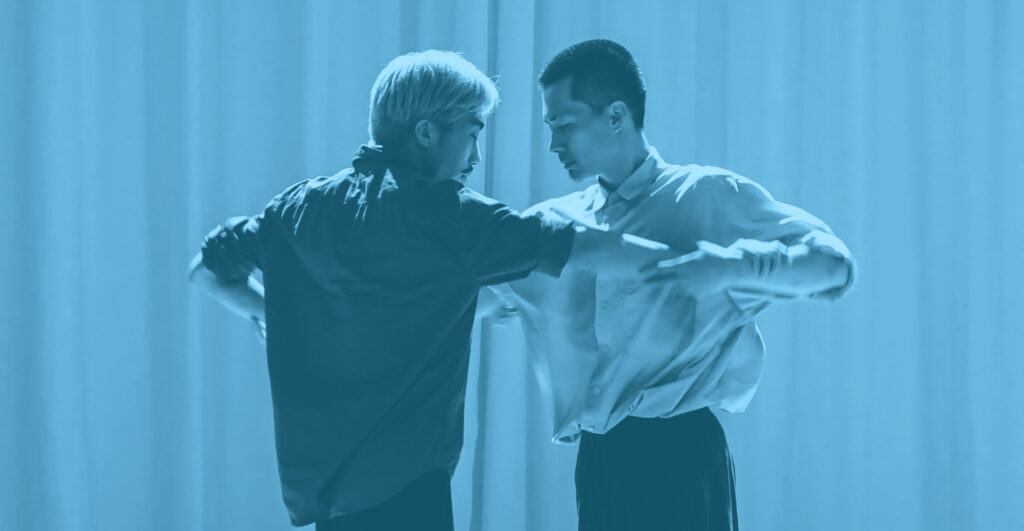 “ ‘False Memories’ is created around the concept of the psychological mind through the perspective of two individuals that have an unspeakable connection with each other. In an abstract way, the feeling stays that they are one entity in their spiritual world, whether they are together or separated in physicality. Our memory is a very fragile concept. Sometimes we remember things the way we want them to be. Our imagination takes us to escape our own reality in order to find comfort or peace”.